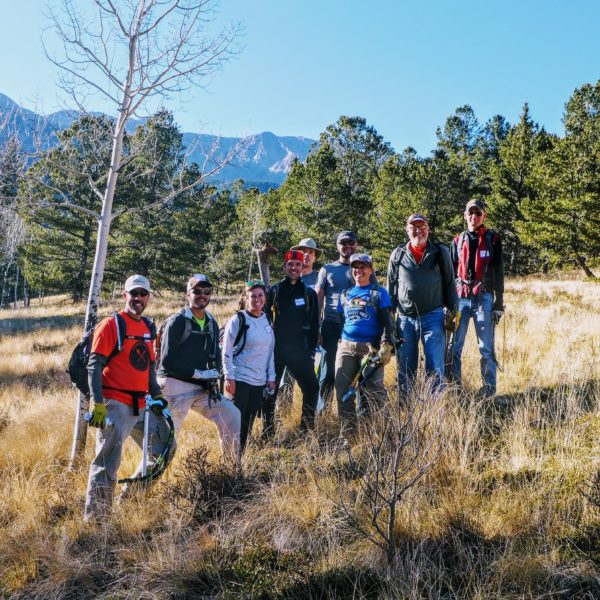 AKA the Missing Link

Jim Schwerin and Harry Hamill (two long time Medicine Wheel Volunteers) , after riding Elk Park then down Barr, or down Longs Ranch Road for several years, link up a bunch of historic squiggles on the Pikes Peak Atlas.  These squiggles represent long abandoned historic trails or old wagon tracks. They eventually find a way to link to the Colorado Springs Utility (CSU) roads in the North Slope Reservoir area and on through to Jones Park. Multiple variations arise as more old trails are discovered.

Many of these old trails are on CSU property, which had been closed to the public since 1910.  Jim begins discussions with  CSU personnel and was told in no uncertain terms that public access through CSU watershed lands was not going to happen.

Jim joins the fledgling mountain bike group – Medicine Wheel Trail Advocates and meets with Josh Osterhoudt and Phil Yearsley (two of the original organization’s founders) to discuss a route that would link the slopes of Pikes Peak with other public lands in the Bear Creek area.  Since that link does not exist but should, they all begin identifying it as the “Missing Link”.  At this point Medicine Wheel is just a very small group with big ideas and an email list of around 30 people on it.

CSU begins a landscape-scale planning process to guide recreational us around the Pikes Peak massif. Dubbed the Pikes Peak Multi Use Plan (PPMUP) process, which goes on for about a year.  Jim and Josh are involved from the beginning.

Jim and Josh get together over beers one night and the idea of the Ring the Peak Trail (RTP) is hatched.  More beer, they pull out the Pikes Peak Atlas, and start drawing lines and connecting everything together. A couple of weeks later, they invited several non-mountain bike members of the PPMUP over one evening and everyone contributes to the RTP draft map.  The plan for a Ring the Peak Trail is presented to the Master team, where it is incorporated into the final PPMUP final report which was completed in September 1999.

Preliminary discussions with CSU begin in the  summer about allowing recreation on CSU watersheds, including the South Slope, in accordance with the recommendations of the PPMUP. Then, in September the U.S is attacked (9/11). Concerned about terrorist attacks on the water supply for Colorado Springs, CSU completely shuts down the idea of public access.  For years. An informal secretive from Elk Park to Jones Park (known to locals as “Elk Ida” Trail is reestablished.

CSU decides to create the Watershed Access Advisory Group (WAAG).  The Long term goal of the group is to open the watersheds public recreation. Many of the former members of the PPMUP become members of the WAAG. Endless meetings ensue.  Really. Endless. All seems hopeless, until…

There’s a tectonic shift somewhere in CSU, and they decide to open the south slope to recreation.  Like right away. Consultants are hired and a plan is put in place by early 2010. CSU finally agrees to open it up, Colorado Springs Parks  Department will manage the new South Slope Recreation Area and develop trails within the property. This policy shift allows for discussion of a route linking the Barr Trail to the Jones Park area – the concept of the “Missing Link Trail” is born.

Jim and Harry create the initial alignment, and walk it with Parks Department staff. Staff approves of the concept. Around the same time, the U.S. Forest Service surveys their property in the area so we can determine where the boundaries are and stay within CSU property. As it turns out, all of the available digital maps are inaccurate, none of the boundaries line up correctly with what is on the ground.

ALMOST THERE! But No!  Since the trail crosses the cog railroad, we need to get approval from the Federal Railroad Administration and State Public Utilities Commission (PUC).

It takes over a year before a Railroad Administration representative performs a site visit and we have approval for the crossing. State PUC representative gets off train, asks what the top speed and stopping distance are.  When told full stop takes 6 feet, says “we’re done here”.

Spencer Wren, the General Manager of the Pikes Peak Cog Railway (COG)provides a private train. This is the beginning of their long-standing support of our efforts to build the Lake Moraine Trail.

Finally! We get PUC approval to cross the COG. ALL SYSTEMS ARE GO!

Unknown to us at the time a storm is brewing. In September, 2012, the Center for Biological Diversity filed a lawsuit claiming that a trail in the Bear Creek watershed, open to OHV use, was impacting a native population of the Greenback Cutthroat Trout (Colorado’s official State fish). This trail (Forest Trail 667) was to be the connection through Bear Creek Park for the Lake Moraine Trail. To resolve the lawsuit, the Bear Creek Roundtable was created and 4 years of meetings ensued. During this period, all planning for the trail is on hold as Medwheel members represent mountain bike interests in the Roundtable. The Rocky Mountain Field Institute provides a good summary of the Roundtable process.

The hold comes off, the alignment is refined over a season by Doug Burznall and Harry Hamill and we have our first (of many) multi-agency walk-throughs. Present are multiple representatives from Colorado Springs Parks, CSU, Colorado Parks and Wildlife. Feedback from agencies require additional route changes and an agreed upon route is established.

Now that final approvals have been granted, Medwheel applies for and receives a grant of $98,000 from the Colorado Parks and Wildlife Non-motorized Trail Grant program. Eric Vaillancourt is named Project Manager and volunteer corridor clearing begins. The COG provides free transportation of volunteers and equipment on their trains saving countless hours of travel and wear and tear on vehicles. Rocky Mountain Field Institute sawyers clear trees in preparation for corridor clearing workdays

Singletrack Trails resumes construction in early summer of 2018 and continues until late summer. Once construction is complete, representatives of Colorado Springs Parks, CSU, and Colorado Parks and Wildlife walk the completed trail and approve trail construction. An informal group of riders from Medicine Wheel celebrate the 20+ year saga of the Missing link-Lake Moraine Trail with a ribbon cutting and beer drinking ceremony.

Volunteers ready to clear corridor through a large meadow.

Volunteers wait to board COG for return down the mountain. The COG provided much of the transportation for volunteers and equipment. Their donation of services was invaluable.