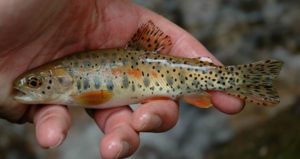 Last week MWTA received notice of another ‘Notice of Intent to Sue’ from the Center for Biological Diversity, sent to the US Forest Service.

The subject of this CBD notice is essentially the same as the lawsuit in 2012 that resulted in the re-route of 666 and other trails in the Bear Creek drainage.  It concern degradation of the habitat within Bear Creek of our state fish, the Greenback Cutthroat Trout, which is listed as “Threatened” through the federal Endangered Species Act.

The notice correctly observes that the federal NEPA process originally suggested putting the re-routed trail on the south side of Mt Kineo (outside of the Bear Creek drainage altogether), but the trail that was constructed is on the north side. It’s worth noting that much of the area of concern is controlled by El Paso County.  It’s not completely clear how the county interacts with the federal NEPA regulations – EPC received the property as a transfer from CS Utilities and is governed by a conservation easement.

In 2015 the revised route was presented to the Bear Creek Roundtable, a group of stakeholders in the area, of which MWTA is a member.  It was reported that the contract trailbuilder had analyzed the proposed southern route and reached the same conclusion we had – it is too steep and loose to build a trail there, especially one that would stand up to motorized use.

During the roundtable process MWTA expressed concerns about process around the trail layout and construction – but the revised Kineo trail was of similar character to the rest of the Jones Park reroute and didn’t negatively impact our trail users compared to building on the south side.  Significantly, it ensured a connection through Jones Park and enabled us to construct the Missing Link connection, now the Lake Moraine Trail.

The CBD assert that this revision wasn’t properly documented, and it hasn’t been verified whether or not the new trail sufficiently protects the fish.  MWTA doesn’t have a position on this aspect of it, but we do agree that after the resources and effort put toward protecting the fish, it makes sense to monitor their condition more carefully.  It was noted by many that data about the habitat and condition of the fish has been lacking throughout this discussion.

In addition to continuing to work with our roundtable partners on this issue, we have reached out to the CBD to better understand their concerns, and to support a resolution retains recreational access – within the constraints of the legal requirement.

Stay tuned for more information as we learn it.